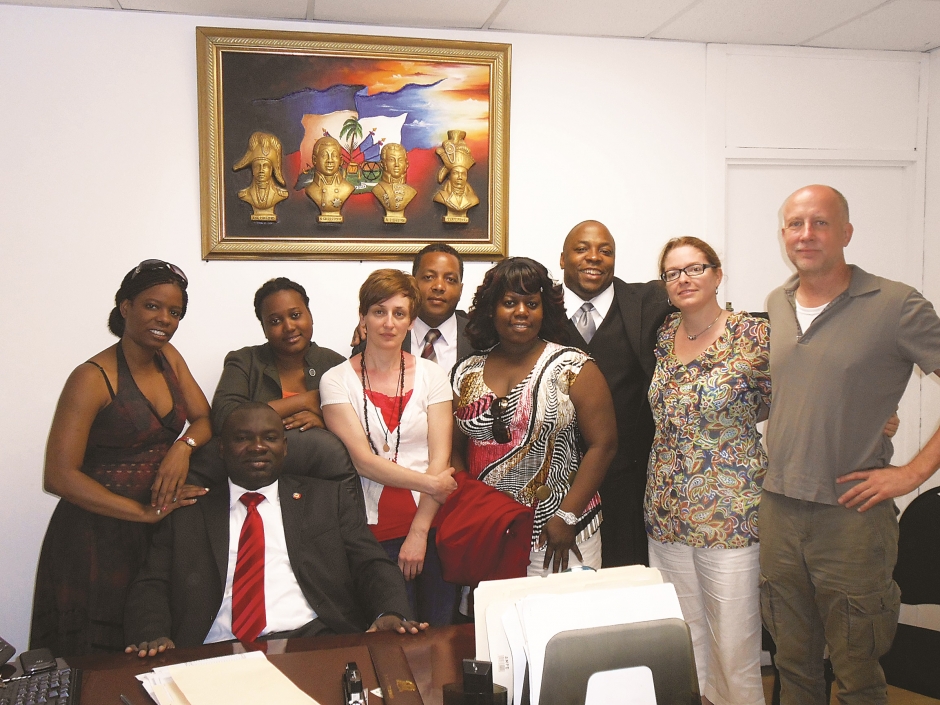 When Easter break approached, most of the Medaille community was excited to go home to their families. However, Courtney Grim, associate professor, Humanities and Jim Brace, professor, Social Sciences had another destination in mind.

During the semester, Brace’s Psychology of Music class helped raise funds and collect school supplies to distribute, in schools, in Haiti. It was a three-week process in which students at Medaille and the University at Buffalo collected pens, pencils, notebooks and other supplies for the Haitian community. The class collected nearly 17,000 items for Haiti.

Although this collection was specifically for Haiti, both Grim and Brace are not strangers to projects benefiting many groups.

Grim and Brace were invited by Haitian Deputy Renaud Jean Baptiste to take part in the groundbreaking ceremony of a new school building and the distribution of collected supplies during the Easter holiday. Traveling throughout Haiti was extremely difficult. Ravaged by the 2010 earthquake, Haiti struggles with lack of infrastructure. Life is extremely difficult and chaotic. The duo explained how traveling 200 miles took the entire day. “The cities were really crowded,” says Grim. “The neighbors and citizens were uncivil.”

Grim recalls one of her most memorable moments as witnessing the way Haitians treated each other. “There is little civility and they are not aware of what is going on in their country,” she explains. “There is no news or newspapers.”

Both Grim and Brace spoke of the abundance of cell phones. “They were found everywhere but there was no Internet connection,” says Brace. “Their access to news seems very limited.”

Another memorable moment for both was finding a building resembling an empty Cantina. Located outside was a pole with a child standing guard. As they looked closer, they noticed that the child was guarding cell phones that were charging. Charged cell phone plates were being sold, as many Haitians did not have electricity.

Grim and Brace recalled beggars on street corners and young children dancing through the streets in a Mardi-Gras like celebration. Although they have little resources Brace spoke of the importance of the Easter Sunday Celebration, as Haiti is predominantly Catholic. “We saw clean clothes drying on bushes,” recalls Brace. “People took pride in their appearance and looking nice.”

The faculty members also spoke of how limited Haitian social structure appears to be. Since there are no social safety nets, once Haitians become elders, most have no choice but to beg for money. “Their banks resemble lotto shops,” says Brace. They did not travel anywhere in the country without an interpreter and another man with a weapon.

Reflecting on one of the memories that impacted him most, Brace says, “There were kids playing naked, but when their mother came out, they lined up and used the pump to bathe, the oldest helping to bathe the younger ones. It was a beautiful thing.”

“I feel like I need to go back to do something successful,” adds Brace, “I’d really like to return to Haiti with doctors.”

Grim, however, said she would not go back. “Their problems are too complex. The change can only occur within Haiti, and I don’t know if they can do that,” she says. “When I returned home, I couldn’t talk about Haiti for three days.”