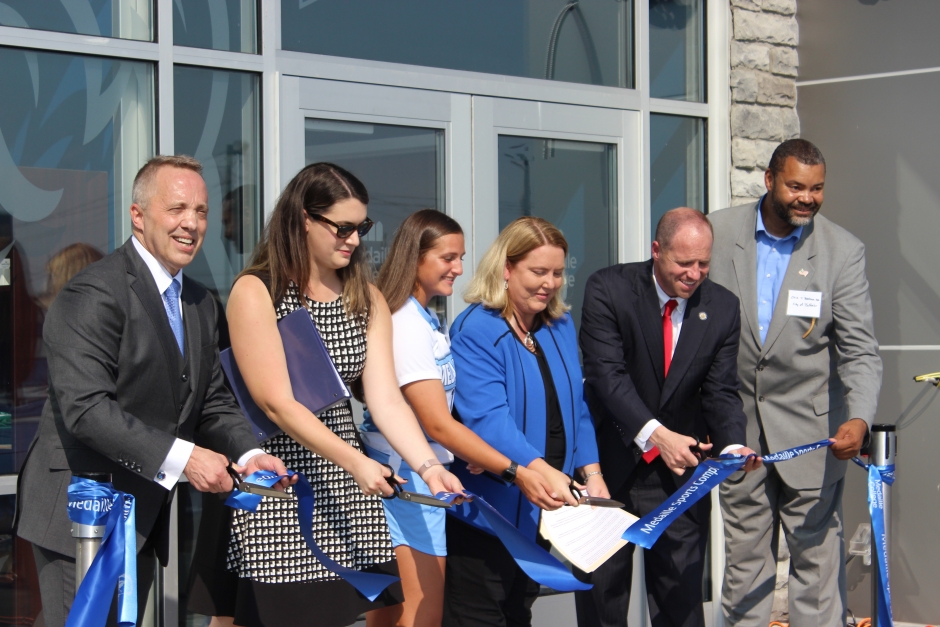 On September 11, the Medaille College and Western New York communities came together to celebrate the grand opening of the Medaille Sports Complex at 427 Elk Street in South Buffalo. The ribbon-cutting ceremony included remarks from New York State Senator Timothy M. Kennedy, Commissioner of Community Services and Recreational Programming for the City of Buffalo Otis Barker, Sr., Medaille College President Dr. Kenneth Macur, Director of Athletics Susan Roarke, Student-Athlete Amanda Arnold and Project Manager with OSC, Inc. Tess Williams. After the ceremony, guests participated in tours of the facilities, and the Mavericks men's and women's soccer teams won two games in a doubleheader against Thiel College on the new field.

Photos from the ribbon-cutting ceremony can be viewed and downloaded at media.medaille.edu.

“Our teams have endured years of playing at a disadvantage without a permanent home base,” says Dr. Macur. “We thank South Buffalo Development for delivering a great field that we can turn over to our athletes.”

The state-of-the-art facilities currently serve as the first official home of the Medaille Mavericks men’s and women’s soccer and lacrosse teams. The Complex, which includes a turf that is lined for soccer, lacrosse and field hockey (with sideline hash marks for football), also offers rental opportunities to the community. The site currently hosts the Buffalo and District Soccer League and Game On! Sports, among other local organizations

“With the creation of this new sports complex, Medaille College has demonstrated a broader vision for its athletic program and a long-term dedication to our city,” says Senator Kennedy. “I'm thrilled to see the Mavericks find their new home in South Buffalo, and I know they'll excel with access to this extraordinary new investment.”

The Medaille Sports Complex is part of the redevelopment of the former Buffalo Color Park by South Buffalo Development, and the site dates back to the 1879 founding of Schoellkopf Aniline and Dye Company. With the site’s developer set to restore neighboring buildings to their former glory, the Medaille Sports Complex promises to be a 21st century architectural gem with strong 19th century roots.

“This state-of-the-art facility is not only an asset to the athletes who compete on behalf of Medaille, but also to the greater community, which will undoubtedly benefit from its offerings,” says Senator Kennedy.

Any community member or organization interested in learning about rental opportunities at the Medaille Sports Complex may visit medaille.edu/rent to submit an inquiry, or may contact Medaille Athletic Director Susan Roarke at Susan.M.Roarke@medaille.edu.